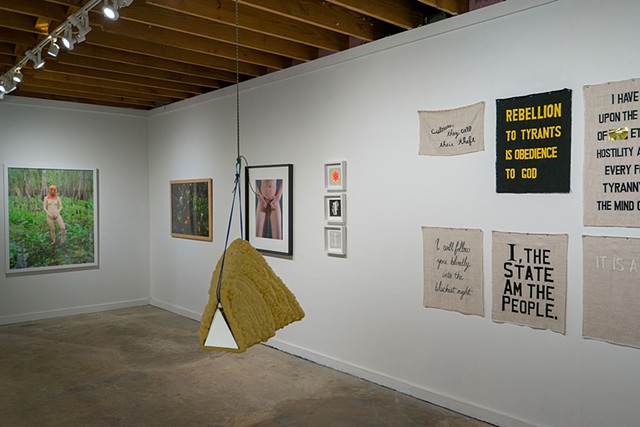 Becky Flanders worldview is one both deeply embedded in the biota and rife with sensuality and shamelessness. Recent works employ techniques of underwater and kaleidoscopic photography to explore themes of the mythic feminine, embodiment, and tropicalia.

Early bodies of work explored gender construction through female standing urination. The artist utilized her own body in these large format film photographs, shooting in mask or costume, with a cable release under foot. Taking the feminine to the level of absurdity, these works enact a shifting position between objective and subjective views of the feminine, as well as the conscious performance of culturally constructed roles.

Flanders photographs of female genital revelation are steeped in mythic imagery, a deep view of time, and the sexual sacred. Across the globe, ancient myths abound of women revealing their genitals like one would blandish an evil eye: to fend off invading armies, to shame the guilty, to calm the sea or to make crops grow. To reveal that which is hidden as a form of magic remains a power of the subversive feminine today. The ability to arouse or titillate is merely one among many long attributed the feminine sacral seat.

Many of the bodies in Flanders photographs are returning the gaze from between the legs, as if from an additional seat of consciousness, akin to a third or fourth eye. Alluding to alternative ways of knowing, hand-made eye-like mandalas are crafted by the artist to be inserted into the vagina. Her photographs rarely employ digital manipulation, but are rather physically constructed situations. In recent works, Flanders uses hand-built kaleidoscopes to fracture the image into psychedelic multiplicity. Vagina monsters from outer space hypnotize, or moodily look back at the viewer from a sea of tropical foliage.